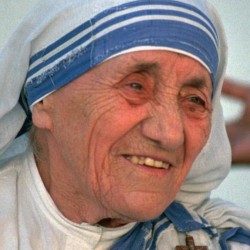 The following article is from Free Inquiry magazine, Volume 18,  Number 1

“Some years after I became a Catholic, I joined Mother Teresa’s
congregation, the Missionaries of Charity. I was one of her sisters for
nine and a half years, living in the Bronx, Rome, and San Francisco,
until I became disillusioned and left in May 1989. As I re-entered the
world, I slowly began to unravel the tangle of lies in which I had
lived. I wondered how I could have believed them for so long.

Three of Mother Teresa’s teachings that are fundamental to her
religious congregation are all the more dangerous because they are
believed so sincerely by her sisters. Most basic is the belief that as
long as a sister obeys she is doing God’s will. Another is the belief
that the sisters have leverage over God by choosing to suffer. Their
suffering makes God very happy. He then dispenses more graces to
humanity. The third is the belief that any attachment to human beings,
even the poor being served, supposedly interferes with the love of God and
must be vigilantly avoided or immediately uprooted.

The efforts to prevent any attachments cause continual chaos and confusion,
movement and change in the congregation. Mother Teresa did not invent these
beliefs – they were prevalent in religious congregations before Vatican
II – but she did everything in her power (which was great) to enforce
them.

Once a sister has accepted these fallacies she will do almost
anything. She can allow her health to be destroyed, neglect those she
vowed to serve, and switch off her feelings and independent thought.
She can turn a blind eye to suffering, inform on her fellow sisters,
tell lies with ease, and ignore public laws and regulations.

Women from many nations joined Mother Teresa in the expectation that
they would help the poor and come closer to God themselves. When I
left, there were more than 3,000 sisters in approximately 400 houses
scattered throughout the world. Many of these sisters who trusted
Mother Teresa to guide them have become broken people.

In the face of overwhelming evidence, some of them have finally admitted that their
trust has been betrayed, that God could not possibly be giving the
orders they hear. It is difficult for them to decide to leave – their
self-confidence has been destroyed, and they have no education beyond
what they brought with them when they joined. I was one of the lucky
ones who mustered enough courage to walk away.

It is in the hope that others may see the fallacy of this purported
way to holiness that I tell a little of what I know. Although there are
relatively few tempted to join Mother Teresa’s congregation of sisters,
there are many who generously have supported her work because they do
not realize how her twisted premises strangle efforts to alleviate
misery. Unaware that most of the donations sit unused in her bank
accounts, they too are deceived into thinking they are helping the poor.

As a Missionary of Charity, I was assigned to record donations and
write the thank-you letters. The money arrived at a frantic rate. The
mail carrier often delivered the letters in sacks. We wrote receipts
for checks of $50,000 and more on a regular basis. Sometimes a donor
would call up and ask if we had received his check, expecting us to
remember it readily because it was so large. How could we say that we
could not recall it because we had received so many that were even
larger?

When Mother spoke publicly, she never asked for money, but she did
encourage people to make sacrifices for the poor, to “give until it
hurts.” Many people did – and they gave it to her. We received touching
letters from people, sometimes apparently poor themselves, who were
making sacrifices to send us a little money for the starving people in
Africa, the flood victims in Bangladesh, or the poor children in India.
Most of the money sat in our bank accounts.

The flood of donations was considered to be a sign of God’s approval
of Mother Teresa’s congregation. We were told by our superiors that we
received more gifts than other religious congregations because God was
pleased with Mother, and because the Missionaries of Charity were the
sisters who were faithful to the true spirit of religious life.

Most of the sisters had no idea how much money the congregation was
amassing. After all, we were taught not to collect anything. One summer
the sisters living on the outskirts of Rome were given more crates of
tomatoes than they could distribute. None of their neighbors wanted
them because the crop had been so prolific that year. The sisters
decided to can the tomatoes rather than let them spoil, but when Mother
found out what they had done she was very displeased. Storing things
showed lack of trust in Divine Providence.

The donations rolled in and were deposited in the bank, but they had
no effect on our ascetic lives and very little effect on the lives of
the poor we were trying to help. We lived a simple life, bare of all
superfluities. We had three sets of clothes, which we mended until the
material was too rotten to patch anymore. We washed our own clothes by
hand. The never-ending piles of sheets and towels from our night
shelter for the homeless we washed by hand, too. Our bathing was
accomplished with only one bucket of water. Dental and medical checkups
were seen as an unnecessary luxury.

Mother was very concerned that we preserve our spirit of poverty.
Spending money would destroy that poverty. She seemed obsessed with
using only the simplest of means for our work. Was this in the best
interests of the people we were trying to help, or were we in fact
using them as a tool to advance our own “sanctity?” In Haiti, to keep
the spirit of poverty, the sisters reused needles until they became
blunt. Seeing the pain caused by the blunt needles, some of the
volunteers offered to procure more needles, but the sisters refused.

We begged for food and supplies from local merchants as though we
had no resources. On one of the rare occasions when we ran out of
donated bread, we went begging at the local store. When our request was
turned down, our superior decreed that the soup kitchen could do
without bread for the day.

It was not only merchants who were offered a chance to be generous.
Airlines were requested to fly sisters and air cargo free of charge.
Hospitals and doctors were expected to absorb the costs of medical
treatment for the sisters or to draw on funds designated for the
religious. Workmen were encouraged to labor without payment or at
reduced rates. We relied heavily on volunteers who worked long hours in
our soup kitchens, shelters, and day camps.

A hard-working farmer devoted many of his waking hours to collecting
and delivering food for our soup kitchens and shelters. “If I didn’t
come, what would you eat?” he asked.
Our Constitution forbade us to beg for more than we needed, but,
when it came to begging, the millions of dollars accumulating in the
bank were treated as if they did not exist.

For years I had to write thousands of letters to donors, telling
them that their entire gift would be used to bring God’s loving
compassion to the poorest of the poor. I was able to keep my
complaining conscience in check because we had been taught that the
Holy Spirit was guiding Mother. To doubt her was a sign that we were
lacking in trust and, even worse, guilty of the sin of pride. I shelved
my objections and hoped that one day I would understand why Mother
wanted to gather so much money, when she herself had taught us that
even storing tomato sauce showed lack of trust in Divine Providence.”

For nearly a decade, Susan Shields was a Missionaries of Charity
sister. She played a key role in Mother Teresa’s organization until she
resigned.

Pat Franklin adds:  The money which poured in is money which could have gone to some of the really great charities which actually do help so many in India and round the world – and which give poor people the gospel as well!  She did not, and as her own death drew near, she reportedly did not know if she was going to heaven or not. ‘Mother’ Teresa  – I’m glad she wasn’t MY mother!