The Real Mandela – The American Vision 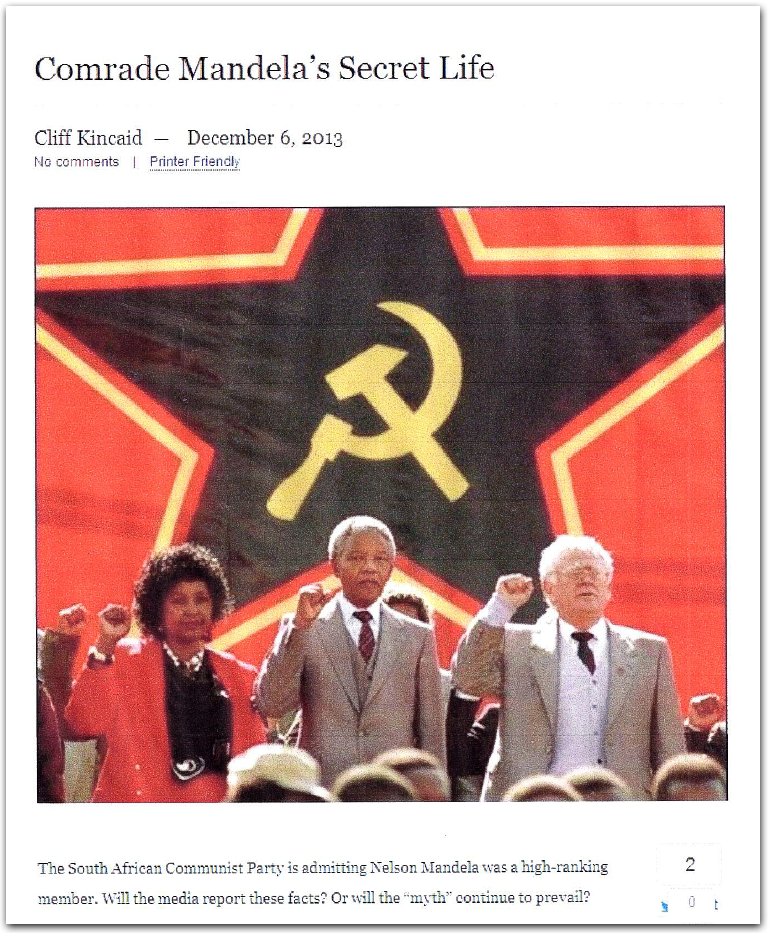 The Real Mandela – The American vision

“There is nothing sacred or inherently superior about non-violent methods of struggle.”

With the media gushing about the greatness of Nelson Mandela now on the day after his death, a counterpoint with the rest of the story is badly needed. Below are a few video interviews of South African missionary Peter Hammond, who tells the real truth about Mandela.

Portrayed as a liberator by the media, Mandela was a Marxist and convicted terrorist. Hammond relates of Mandela:

He admitted in open court—pleaded “guilty”—and remember, he was trained as a lawyer—he pleaded “guilty” to 156 acts of public violence and terrorism. He was the head of the revolutionary terrorist wing of the ANC [African National Congress] “Umkhonto we Sizwe.” And he was behind so many different operations: from the plotting of bombs in the railway station (which killed women and children, which crippled people), bombs in shopping centers, attacks on farmers, . . . so many acts of violence.

He goes on to say that modern portrayals make Mandela out to be a saint, but never mention why he was in prison to begin with. It was for good and just reason. “Not even the Amnesty International would take his case, because they said he wasn’t a political prisoner. He had had a fair trial and a reasonable sentence. He had his day in court. He was not a political prisoner. He was in jail for acts of violence.”

He relates that the crimes for which Mandela was given life imprisonment in South Africa, he would have received the death penalty in the U.S. or Britain at the time. It was the political climate that later got him released, and leftist revisionism that has whitewashed his early life of violence. If anything, Mandela’s legacy is an argument in favor of the death penalty. When such criminals are not disposed of, there is always a chance future political powers may be corrupt enough to release them—perhaps even into positions of power.

In light of the truth about Mandela, Hammond can say, “I’m astounded that so many in the west idolize Nelson Mandela and lift him up as a messianic figure, because they obviously don’t know what he teaches, what he believes, or what he does, or his support for some of the most radical Marxist dictatorships on the planet.”

This includes many Christians: “A lot of Christians out there idolize Nelson Mandela just because they’ve only been given false, misleading, and incomplete information.”

When Mandela fell ill a year ago, the media began to prepare for the very hagiography which it is now publishing about the fallen terrorist. Barack Obama seized the opportunity to tour South Africa, speaking on human rights everywhere he went, invoking the name of Mandela at every stop and praising his work.

Or he might have said: “One crypto-communist friend of terrorists standing beside a known communist and convicted terrorist would’ve made for a revealing moment.”

In the wake of the Boston bombings, Obama stated that the acts would be investigated as acts of terrorism, because, “Any time bombs are used to target innocent civilians it is an act of terror.”

Yet this morning, when addressing the death of Mandela only a few months later, the same president said, “We’ve lost one of the most influential, courageous, and profoundly good human beings that any of us will share time with on this earth.”

There is indeed a disconnect in the public discourse.

And yes, even, many Christians will be confused and cornered. Many will find themselves trapped by the perceived dilemma created by the whitewashed narrative of Mandela. If opponents openly criticize him, they risk being publicly associated a friends of apartheid and racism (just as supporters of states’ rights in the U.S. today get associated unduly with slavery and racism). Give Mandela a pass, however, and you give a pass to his Marxist ideology and terrorism. It sounds a lot like many other lesser-of-two-evils decisions presented to us.

The videos which follow come from a missionary who judges matters differently. He upholds the truth in the public square, no matter what people say against him or try to do to him.

Mandela has passed on to stand before his maker. We will now see if God judges according to the lesser of evils.

If you’d like to learn more about Mandela’s communism, just read the book he himself wrote, and which was part of the loads of evidence used against him in his trial: How to Be a Good Communist.